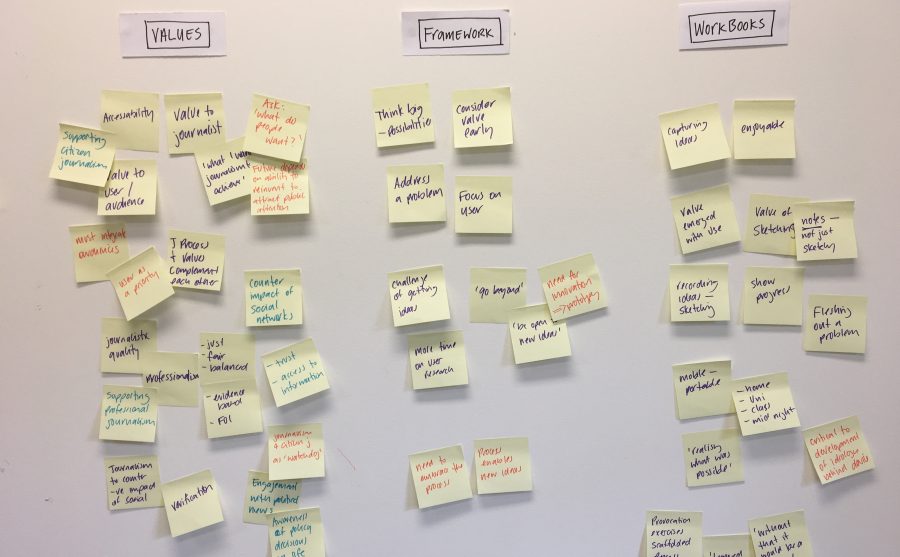 Data from student projects, reflective essays and interviews in 2016.

The contextual phase of our research aimed to understand how the 2016 cohort of Journalism Design students imagined the future of journalism. We were interested in how they used design methods and how and when they considered journalistic values. To do this, we studied the design projects and reflective essays created by students as part of course assessment and we interviewed some about their experience. A few themes emerged from the data: that journalistic values played an important role in the design process; that journalism needed to focus more strongly on audiences and users; and that new ideas would come from thinking big.

Most of the students we interviewed said they thought about journalistic principles and practices early in the design process and some revisited these throughout their project. These included ideas around journalistic ethics, accuracy, balance and rigour in reporting, as well as the right to know and quality of production. There was a sense that these things were key to professional practice and were what defined professional journalism from other forms of content production.

This thinking was evident in some design projects, where students aimed to create applications that encouraged engagement with political news or aimed to raise awareness of public policy. Other projects sought to counter the impact of social networks by delivering news from different perspectives, and others saw a role for professional journalism alongside citizen reporting.

The process of interviewing users and understanding issues from their perspective seemed to give students an appreciation of the role of the audience in journalism. Some tried to design for specific groups of people, sometimes these were students their own age, but others were interested in children or disadvantaged groups such as homeless people.

Early in the project the students were encouraged to do some contextual research into their chosen issues. This involved, variously, interviews, observations and sometimes surveys. Later they were encouraged to get feedback on their design ideas and prototypes.

Comments in interviews and assessment indicated the value of this, for instance, one student pointed out that it was “absolutely essential for me to understand how a user’s going to look at this”. Another said professional journalists needed to priortise users in news consumption and production, and another noted that journalists should be asking “what do people want?”

For one student, greater emphasis on users was a result of a realisation that technological change meant “we are no longer able to simply write stories and expect engagement from all demographics. From my experience with the design process, a strategy that may work for my future practice is spending time with both the subjects and the consumers of news.”

There was a feeling among the students that to come up with new ideas they would need to think big and challenge assumptions. In interviews, this view often emerged when we asked what advice student’s would give others who were about to take the course. These are some of their comments:

“… think of some crazy idea like definitely go beyond, because I feel like even though our tool is good, I think it probably could have been more out there […] So don’t just stick to what you know.”

“Be open to any new ideas, look at film and television, or look at what NASA’s doing and stuff like that. Just open your mind to the possibilities and how to engage that with journalism.”